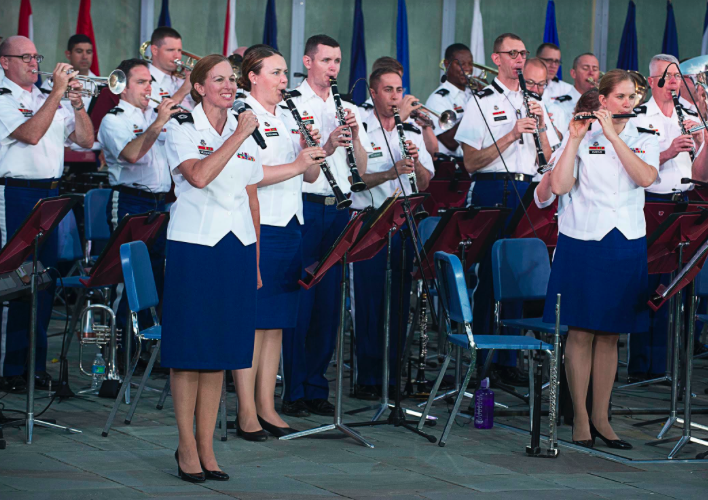 The West Point Band with “Music Under The Stars” to be held Saturday, August 11 at 7:30 p.m. in the Trophypoint Amphitheater featuring a tribute to the movie “Hello Dolly” filmed in parts of the Hudson Valley including West Point 50 years ago. The concert is free and open to the public, and will also include numbers from others on and off Broadway shows.

Beauty and the Grease will be performing Saturday, August 11 at the 6th Annual Anthony Amoros Car Show at Rockland Community College from 11 a.m. to 4 p.m. Also performing will be an Elvis Impersonator. Beauty and the Grease will also appear Wednesday, August 15 at noon to 1 p.m. and 2 to 3 p.m. at Empire City Casino in Yonkers. The Landsharks with a tribute to Jimmy Buffett and the Beach Boys at Empire City Casino at 5 p.m. Contact empirecitycasino.com.

“Blackbird,” a London Olivier award-wining play, will be presented by Shades Repertory Theatre at the Garner Arts Center in Garnerville at 8 p.m. on August 24. Nick Pascarella and Gino Sarno will revise their roles in the Shades Rep production. Visit shadesrep.com.

“Cabaret” to be performed on at the White Plains Performing Art Center through August 12, directed and choreographed by MK Lawson and features many Westchester County actors. Visit wppac.com/shows/cabaret for more info.

“Anything Goes,” the Cole Porter musical from way back, will be in the thirties, drawing fans in at Westchester Broadway Theatre in Elmsford. A tribute to Abba Saturday, August 18, and a tribute to Elton John and Billy Joel, Saturday, August 25. Contact broadwaytheatre.com or call 914-592-2222.

Singer and songwriter Miguel Yannuzzi to be performing on Pitch Thursday, August 30 at the Industrial Arts Brewing Center in the Garner Arts Center, Garnerville. Showtime will be at 6:30 p.m.