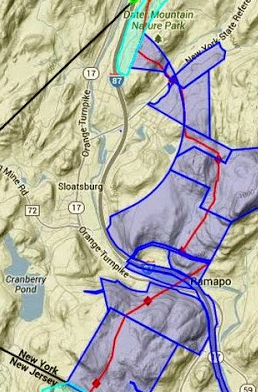 Many people have heard faint rumors of the Bakken oil boom in western North Dakota, with Williston, ND officially dubbed as Boomtown, USA.

The Bakken rock formation is being hydraulically fracked for oil that the U.S. Geological Survey expects could ultimately produce some seven billion barrels. Millions of gallons per week of unrefined, highly volatile petroleum products are shipped by rail and barge via Hudson River waterway to Albany. One estimate suggested that currently 25 million gallons per week of Bakken oil products are shipped by barge alone from Albany to the Linden, NJ, refinery.

Now the Pilgrim Pipe Co. has proposed to fast track a new 178 mile double 16″ and 18″ pipeline that would connect Linden’s refinery to Albany, New York and transport anything from gasoline to diesel to heating oil and aviation fuel. The 18” pipeline would carry crude oil originating from the Bakken region.

Proposed Pilgrim Oil Pipeline To Skirt Sloatsburg added by dskriloff on May 28, 2014
View all posts by dskriloff →